skip to main | skip to sidebar

I have included photos from my cycling commrades Kimberly Wolf ( who I coached for in the past with TNT) and Rich Solis, aka, Rice Man(from Deathride Training days and TNT days). This particular weekend, we were charged with riding on our own.The goal was 70's miles and 7500 feet of climbing. My Dream Team, the team that I am assigned too, wanted to do a Marin Ride. So, I offered to create the route. My first route did not have enough miles nor elevation per Head Coach, Jacqui. Bumpster came up with a more creative one with the input of my friend Gil. The route was approved and we made the debut. Some of the roads were new to me. Sat. came and 25 inspired cyclists were ready to accomplish the Marin Hills. It was sunny and cool. We did not hit headwinds until Hwy 1. We rolled from the Center of Fairfax; we started immediately climbing Fairfax-Bolinas Rd. This brought us to the top before the glorious descent to the dam. Then, we climbed up to Ridgecrest. Next, we had to conquer the 7 sisters (or bitches in cycling community). Then, onward to the Eastern Ridgecrest of Mt. Tam: glorious views of San Francisco and Golden Gate Bridge. Next descent to Pan Toll and down Panaramic Hwy. Spectaculer ocean views of Stinson Beach. The first 21 miles, we already tackled 4200 feet of climbing. Next challenge were the rollers on Hwy 1 to Pt. Reyes. Upon arrival, glorious site: surprise sag by our own Dream team members: KSue and Sue. We were treated to wonderful healthy treats. I made the announcement that I made a mistake and we were going to have more miles and more climbing. However, our coaches would be proud. We continued north for 10 miles before the infamous Marshall Wall. We had two short climbs of 21%. The reward: great descent among the cows and farmlands. Next, we headed to the Cheesefactory and the town of Nicasio. From there, we continued southbound and did 2 additional climbs. The finish was a descent into the town of Fairfax. This was a great beautiful and challenging ride: 82.4 miles and 9300 feet of climbing. Watch out Markleeville. I have now officially earned the name of Sadistic Sue.
Posted by Bumpster at 7:43 AM 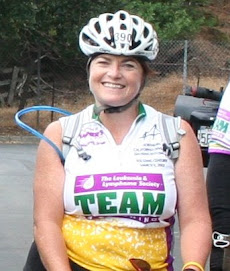 From one Dot to Another 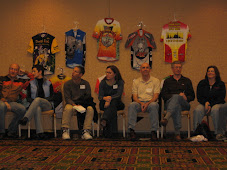 Bumpster
Bay Area, Ca., United States
I am wanting to share my passion of road cycling. This blog was initiated to share my training journey with Team in Training for the Deathride 2008 Endurance Event. 2000 was my introduction to road cycling. While I was training for a marathon, I suffered a pelvic fracture. Road cycling was my rehab and thus TNT was my source for recovery. My accomplishments thus far, numerous centuries(well over 50+), deathride in 05 and the triplecrown in 06.